Massage is one of the oldest techniques of deep relaxation, alleviation of pain and promotion of well-being. A pleasant massage activates the regeneration- and reparation processes of the body and has physical as well as important physiological effects. With a specific treatment, one can dissolve inner tensions and increase the joy for life and the energy level. There are countless variations of massages, which all aim to give well-being.

The Thai massage is a sacred dance of two spiritual hearts. Its essence is the healing touch, the sacred connection of two people on an energetic level, which is capable of bringing mind and soul back into balance and to dissolve energy blocks.

The Ayurvedic and Buddhist roots of the Thai massage date back more than 2500 years and they were originally practiced by monks in Buddhist temples. “Nuad Borean” which means “ancient healthful touch” are said to have served to mobilize the body after meditations that were lasting for hours. In that, Thai massage is meditation in movement and a deeply spiritual practice.

Thai massage is based on the following four principles: 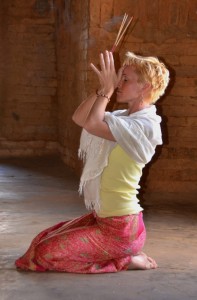 During the massage the recipient gets the masseur’s undivided attention and kindness. They connect through his/her empathy and spiritual devotion. Being aware that we are all one and connected, we realise that Thai massage, in combination with mindfulness, mediation and the awareness for the here – and – now, is much more than just body work.

The knowledge of Thai massage is based on the 72,000 Nadis, which represent the energy lines that extend across the whole body and supply our body with Prana. Ten of the most important energy lines – sib sen – run through this energy field and can be stimulated through acupressure. With pressure aimed on special points it can release tensions in the body and get its energy back into the flow.

Thai massage is like passive yoga and includes many elements of extension and mobilisation. Each treatment starts with an introductive Puja (devotional prayer), by which the recipient and the giver connect energetically. There is no fixed therapeutic procedure in Thai massage as it progresses like a dance through flowing movements. In a state of deep meditation, accumulated energy blocks are released and the healing process on all levels of being is set in motion. By this beneficial massage and the spiritual art of healing body, mind and soul are back in harmony and boost the feeling of deep satisfaction on all levels.

Lomi Lomi Nui is an art of massage from the Hawaii Temples, a ritual originally practiced by the Kahunas (priests) for hundreds of years to celebrate important transition points in life. In Huna philosophy it was very important to get lose of old ways before starting a new life cycle. Thus Lomi Lomi does not only serve to get physical and mental relaxation, but effects much deeper. Blockages are dissolved on the spiritual level and body, mind and soul are rebalanced.

Lomi Lomi is a wonderfully flowing massage where hands, but mainly forearms are used to dissolve tensions. After an introductive devotion, the treatment starts on the back, which symbolises a person’s past. It then addresses the front part of the body and the belly, the home of emotions and memories. Lomi Lomi is a journey through and to our inner selves.

The word Aloha, like the ancient temple massage, is a vivid symbol for devotion and respect for life itself. Aloha means as much as breath of life and is a salutation, but reflects also the way to live in love with others and itself. Aloha is sending and receiving positive energy.